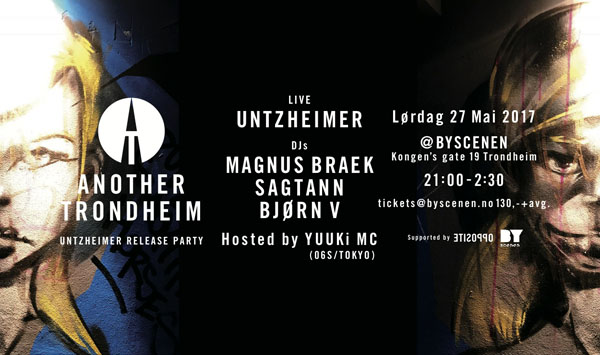 Trondheim’s newly launched dance music event “Another Trondheim” is gearing up for another exciting session. Another Trondheim is the offshoot of the Japanese club night «Another Tokyo» focusing on cutting edge electronic dance music and a friendly and vibrant atmosphere.

This time Another Trondheim brings in some fresh talent behind the decks. Fredrik and Håvard, who host the weekly electronic music update «Sagtann» on Radio Revolt will play a set of uncompromising techno, house, glitch, jersey club and trap.

The night will also bring some proper old-school talent. Bjørn V, who competed in the Norwegian DMC DJ championships in the late 80s with his Bodø hip-hop crew Felony Force. He later moved to Trondheim and became the resident DJ and music curator at the legendary Dalí club. Expect fat beats, hip-hop breaks, garage and drum & bass.

There will also be a live concert. The Untzheimer EP release-party. Untzheimer is Trondheim’s only electro group, consisting of Tomas (keys, guitars) and Axel (drums, keys). They are releasing their very first EP on the night and will play an exclusive live-set with lots of new material.

And finally the residents: YUUKi MC will be on stage hyping the crowd throughout the night and Magnus BRAEK will end the night with a set of his signature mix of forefront wonky bass music and soulful drum & bass.